MS is not a life sentence

As well as writing my own piece last month for the local paper about life with MS my colleague Andrew Quinn also came to speak to me on a separate occasion so he could also write about my diagnosis and life thereafter. And I have to say it was a strange experience to be on the other side of the writing process. But he did a brilliant job, capturing everything that I wanted to get across perfectly - and being very complementary, which also helps! So, here it is in its entirety for anyone who missed it - including the brilliant photo Andy took to accompany the article. 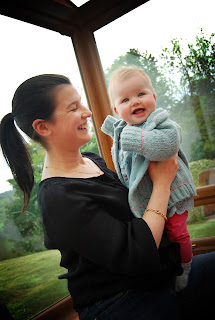 At first glance Catherine Doran cuts the appearance of a woman who knows what it is to feel deliriously happy. Catherine, 29, married her now husband Joe Doran last March and last December the newly weds celebrated the birth of their first child, a baby girl, called Charlotte.
Like every other bride-to-be Catherine relished organising her big day and when it finally arrived it did not disappoint.
“Marrying Joe and when Charlotte was born were the two happiest days of my life,” recalls Catherine tearfully. “I was so emotional when myself and Joe exchanged our wedding vows - especially when we said ‘in sickness and in health’.”
The reason this part of the wedding ceremony resonated with Catherine was because one year earlier she had been diagnosed with Multiple sclerosis (MS).
“When you think about it, most young couples are in good health when they get married,” says Catherine. “I was diagnosed with MS a year before I got married so when Joe was reciting the ‘in sickness and in health’ part of the vows I became very emotional.”
Catherine and Joe celebrated their wedding day at the An Grainan Hotel, Co. Donegal just outside Derry. Only close friends and family were aware that Catherine had MS but her husband Joe decided to talk about Catherine’s condition openly during his wedding speech.
“There wasn’t a dry eye in the house that day,” says Catherine through a mixture of smiles and tears. “Joe’s speech was the most wonderful thing I’d ever heard and when he told everyone in the room that I had MS. Joe’s speech made everything feel so right that day - it meant so much to me.”
Adversity is something that Catherine has become all too familiar since her diagnosis but still she has managed to experience the things that most young women aspire towards. Since finding out that she had MS, Catherine has had her wedding day, given birth to Charlotte and both her and Joe bought a wonderful new home on the outskirts of Derry.
Catherine is currently enjoying her maternity leave from her job as a reporter for The Derry Journal; she has used her time away from work extremely well; she keeps an online account of what life is like for her through her blog titled ‘A life with MS’. Catherine is also an active member of the Foyle branch of the MS Society and on her Twitter profile she warns all who ‘follow’ to ‘expect MS awareness tweets’.
“I knew virtually nothing about MS before I was diagnosed but now I am an expert in it,” she smiles. “I want to stress a very serious point - a life with MS is not a life sentence. I might be ill but everyday I am determined to live as normal a life as possible.”
Catherine first started to notice that something was wrong in 2008. Various symptoms manifested and after collapsing both at work and at home Catherine was referred to a Neurologist Consultant by her GP.
“In the beginning I started to experience what many MS sufferers experience and that is problem with their bladder. All of a sudden I was having to go the toilet a lot more than usual. It would happen very suddenly - it became a serious issue for me so much so that when I was going out I had to know where the nearest toilets were.
“I was working in Donegal at the time and I remember on the way to work one day I had to stop and use the toilet seven times along the way. There’s not a toilet on the way Letterkenny that I don’t know about,” she laughs.
One of the most common symptoms experience by many MS sufferers is feet pains. Catherine says that her doctor asks her, on a scale of one to ten, how painful her feet are. She explained that since her diagnosis and with the help of painkillers the pain in her feet is never below three.
“MS patients suffer terribly from fatigue,” she explains. “I found that I put a lot of pressure on my feet they would be very painful a few days later. It took getting used to and thankfully, fatigue hasn’t been a major issue for me for the last four or five months.”
After collapsing twice Catherine went to see her GP and was then sent to have an MRI scan in Coleraine.
“Anyone who knows me will tell you how fiercely independent I am - so much so that I drove myself to Coleraine for my scan. I thought it was just routine - although I felt unwell, I was still able to work and get on with the day-to-day things.”
Catherine met with the consultant a few weeks after her scan to find out her results.
“I couldn’t believe it,” she says. “I asked him for my results and he said that he thought that I might have MS. I didn’t know what to say - I lost my voice and he basically threw his hands in the air signalling that there was nothing they could do for me.

After the initial shock of her MS diagnosis Catherine returned to work, got married and gave birth to Charlotte. Despite her admirable courage and stoicism she said that her first ever relapse during the Christmas of 2009 was one of the most lonely periods of her life.
“I was so scared when I went through the first relapse. I spent a lot of time along by myself and it’s not nice sometimes when you’re alone with your thoughts. However, I have a very close family and circle of friends - along with Joe they helped and supported me. Without them I don’t think I’d be in the position I’m in today - they were all just so supportive.”
An example of just how determined Catherine was to limit the affect her condition would have on her life occurred when she and her friends went to London for her hen party in February 2010.
“It was the month before my wedding and although my maid of honour had organised the trip around my condition I was hell bent on wearing high heels on the first night of my hen party.”
This week was MS Awareness Week. Asked what her message would be to people with the condition, Catherine pondered for a few seconds, took a deep breath and said:
“Stay positive because it’s only way to rationalise what’s going on,” she says honestly. “I can only speak for myself but I found that by staying positive it helped me through my toughest days. I am very lucky that I have a husband like Joe and that I have such an amazing family but people with MS have to know that the help and support is out there.
“The support that I got from the healthcare professional in the NHS was just amazing - the MS specialist nurses have been there for me every step of the way and Terry from the Foyle branch of the MS Society has just been second to none.”
Catherine has spent the last few years highlighting MS and she urges everyone with the condition to sign up to the national register. She holds out hope that someday a cure will be available but at the minute she is setting her sights on goals closer to home.
“I definitely want Charlotte to have a few brother and sisters. I’ve always wanted a big family and although I have to be realistic I am not going to let my condition stop me from giving my family the best possible life.”
Posted by Catherine at 21:01