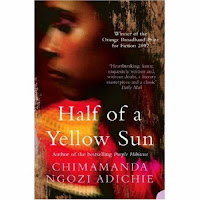 Anyone who knows me well knows I'm a massive lover of books.

My husband can't understand how I can devour one in a few days, questioning how I've understood the story or the character quirks. As a child I couldn't even go to Tesco without a book in my hand - the one mile journey was much too long without some reading material to pass the time - and I've been known to lose myself in a bookshop for hours at a time.

So, when I heard about World Book Night it was as if it was made for me to take part in. The idea is easy. They're giving away one million books on 5th March 2011 and in order to do so they requested 20,000 'givers' to give away 48 copies of one title chosen from their list of 25. In case you're wondering, I know 48 times 20,000 doesn't equal one million ... the surplus will be given to hospitals and prisons etc by the organisers themselves.

I rapidly filled the form and hoped I would be chosen. And guess what, I have been! This fills me with so much joy I can't describe it. First of all, if I won the lottery this is definitely what I would do with some of the money, giving away the gift of reading to random people in the street. Secondly, it's my first wedding anniversary and this seems like such a novel way to mark the occasion. Finally, as part of the form filling you had to give the organisers an idea of who and why you would give your 48 copies to and I mentioned that part of my quota would go to my local MS Society branch. I'm hoping that Terry, the branch organiser, will have an idea of which members would appreciate a book, maybe those stuck at home or unable to work, and let them know that they are not alone.

Because in my mind a person who reads is never on their own.

As well as giving random people in the street a few copies my family and friends will definitely be in line for a good read too but if you think you deserve one then leave a comment telling me why and I'll pick two people at random and post them out ... don't say I'm not generous :)

For the record the book I'm giving away is Half of a Yellow Sun by Chimamanda Ngozi Adichie and you can read a bit about it - to see if it floats your boat as much as it did mine - at http://www.halfofayellowsun.com/
Posted by Catherine at 21:24