It's hard to believe but this time last year I was just about to embark on my Copaxone journey.
It was one I faced with trepidation but also filled with hope.
Having already tried Rebif and Avonex I was very aware that Copaxone was sort of my last throw of the dice, and felt as though I really was putting all of my eggs in one basket.
Having to inject every night was always something I worried about but 12 months later I can honestly say it doesn't bother me anywhere near as much as I expected.
Yes, I still avoid my legs (they bruise too easily and the pain isn't great either!) and while I use my arms because it helps with rotating my injection sites, I still wince every time the needle pierces my skin.
Generally each injection is over within ten seconds.
I've even been known to take it with me to a restaurant, nip to the toilets and inject quickly before anyone even notices I've gone.
After all this time I still have days were I forget to take it, despite my alarm buzzing at 7.30pm.
Sometimes it's the day after before the injection site annoys me, as they can get incredibly itchy. Which isn't a great look at work as I surreptitiously try to scratch my stomach.
Talking of my stomach, it's my favourite place to inject. I'm (un)lucky enough to still have some baby weight lingering on my middle and as a result I hardy feel the needle going in.
I desperately want to lose my 'mum tum' but when my diet gets side-tracked I always console myself with the knowledge that my injections will at least not hurt so much.
But on the whole I've got used to it.
I've probably only missed about 5 or 6 doses in a whole year so by my calculation that's 360 injections. Each one loaded with a medication I honestly believe is working for me.
I have no major side effects, especially compared to Rebif which left me groggy for half the week.
Crucially I have had no significant relapse in the last year.
Don't get me wrong, I've had some exacerbation of old symptoms, and the fatigue and pain are things I am unlikely to ever live without.
But NO relapses is a milestone to be celebrated. I'll take that. 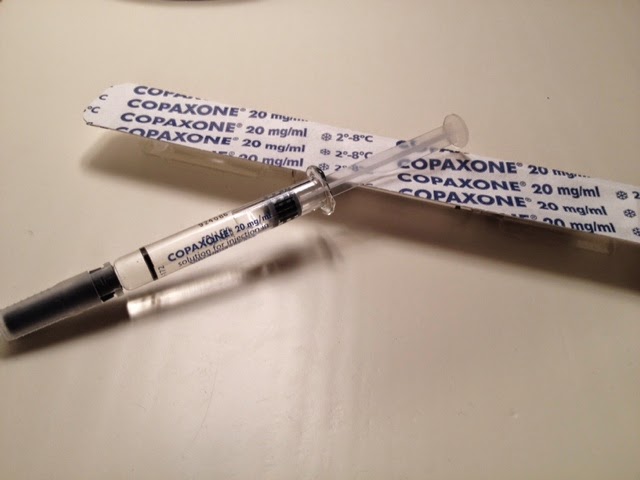