Welcome to the world Lucy

It's only taken me two weeks to post this announcement (which I consider a triumph!) but she has arrived ... my precious second daughter.
Born on Monday 1st July at 7.48pm by emergency Caesarean section, she weighed in at exactly the same weight as her big sister, 7lbs 12oz, and is simply perfect.
It wasn't be easiest labour, with me contracting irregularly for 12 hours before being transferred to a midwifery-led unit. There was much discussion about my 'case' prior to this move from the ante-natal ward as the midwifes couldn't decide where to send me - with MS being the main worry.
Some were happy enough for me to go midwifery led, counselling that I had had a relatively straightforward pregnancy, was presenting no symptoms, wasn't in a relapse and was off all of my medications.
Others however were erring on the side of caution, preferring me to go straight to the labour ward. I wasn't keen to go this way as my birth with Charlotte had been very medicalised because my waters had broke before I was in established labour.
I was determined that this second birth would be more natural and I was over the moon when they agreed to let me go to the midwifery led unit. Joe on the other hand was less pleased but was reassured by the knowledge that the labour ward is right next door!
Once there I thankfully started to get going and four hours later I had progressed from 6-9cms. All good news except when examining me the midwife firstly broke my waters (of which there was lots!) and secondly, felt a nose! Basically the baby was facing the wrong way.
Much madness ensued, with the room filling with people very quickly, and I was moved swiftly to the labour ward next door. A doctor was called, he examined me and when baby refused to budge, the decision was taken to give me a c-section.
I was half relieved, half gutted. Relieved because it meant a spinal block, and after surviving for four solid hours on simply gas and air, the thought of no pain was palpable. But of course I was gutted to be having such major surgery after getting so far along by myself.
However, getting baby here safely was the priority and both Joe and I were happy to take the doctor's advice.
An hour and a half later, in theatre and with Joe decked in scrubs beside me, the doctor peeked his head over the dividing sheet and asked us, 'Do you know what you're having?' We replied, 'No' and literally ten seconds later a wee head popped up and he declared 'It's a girl!'
So here she is, our second bundle of joy, a beautiful daughter, a sister for Charlotte and a source of much love and cuddles .... I'm so very proud to introduce LUCY ELLEN DORAN! 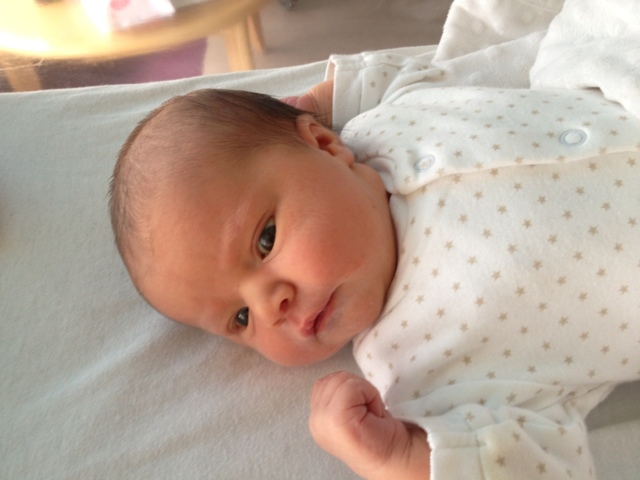